After over 6 months of planning, I have the final electric permit signed off and FPL service installation completed to the garage.   Today, the electrician will complete the internal home run circuits from the new panel to their respective destinations.   Simultaneously, he will disconnect the power from the house.   I am posting this because it is just the beginning of all of my power / solar / automation projects and for documentation purposes. 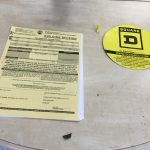 As some of you know, I have many long term plans for the garage.  It is an awesome space!  It measures 24×48 linear feet (1152 sq ft), is a fully enclosed structure with insulation, central air conditioning and 16 foot high ceilings.  Clearly, there are unlimited possibilities.  My plans are to eventually take this space completely off the electric grid with solar power.  I will be adding a large rain water reclamation / filter system for both drinking and bathing.  I’ll be getting creative with waste (probably a stand alone septic).  I have quite a few home automation and energy saving ideas and will implement all of them here.  Not to worry, all of these projects will be blogged here. 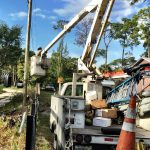 My plan for this structure is to partition it into two logical pieces – a garage on once side and my office/workshop / studio on the other.  The studio will have a kitchenette with full size appliances as well as a bathroom/shower.    As I design the new space, I’ll utilize “little house” ideas to maximize space and so on.  I know that the way it is currently permitted, as it sits today, this structure can not legally become a residence.  In the future, I may expand the physical structure, but that is long into the future.

I have learned that Palm Beach County is very picky with permits.  They put me (and my electrician) through the ringer to get all of the documentation and planning completed properly.   We submitted and subsequently modified the paperwork 8 times before it was finally approved.  Even then, it took over 2 months to get the FPL planners to schedule the final hookup. 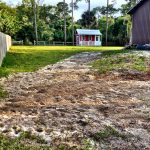 As the homestead is now combined into one large plat (two acres with a house and a workshop/barn/garage, shed and so on),  To get a separate meter from the house, FPL made us pull a “business” account.

I have already documented why calling 811 is very important and how the trenching was completed for the underground feeder for the electric service.   What follows are the bullet points of what has happened in the past two weeks.

Of course, none of the actual construction could commence until the permits were issued.   Once we got the permit, we started with the trenching for the underground feeder.  That had its share of issues when the contractors damaged the storm sewer.   Well, once that was repaired, the conduit was placed in the trench, the meter can structure was installed on the outside of the garage and the internal panel was installed. 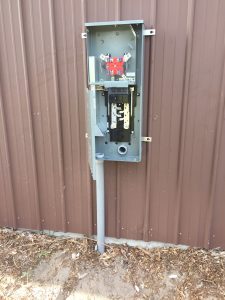 External meter prior to hookup 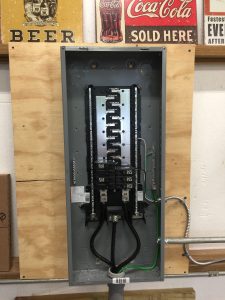 Internal Power Panel prior to hookup

Since we previously had a 50 amp circuit coming from the house through a 400 foot buried conduit to a separate sub-panel in the garage, that all needed to be re-architected.

The garage previously had 5 circuits in place.

The new panel now has 5 breakers in it with new Romex to each of these circuits.  It didn’t take much for the electrician to connect to them.  Once that was completed, we contacted the county and they sent out the inspector to verify all was well.  The inspector came on site a few days later and with only one minor modification (which was done while he was there to his satisfaction), the permit was signed off.

The next day, I called Tom, my FPL scheduling contact, to arrange a time when they can do a final hookup.  He stated it will take a week once he sees the final permit paperwork.   I got a call the next morning and was told all was in order and I needed to call the FPL business office to open a new account.   I did so and emailed Tom.

As of now, a few items remain.  I won’t go into much detail, but they are:

We should be able to accomplish all of the above tasks in one afternoon – Hopefully tomorrow.

As for the mention of Ethernet and cable above, I am going to take advantage that there is already a buried conduit between the house and the garage.  Code states that the existing wiring needs to be removed.  We already know I have lots of projects planned for the garage, and since I already have high speed internet and cable service to the house, it seems logical to pull runs from the house to the garage.

I thought ahead and in preparation for today, I previously purchased 1000 feet of Cat6e exterior rated cable and 1000 feet of exterior RG-6 cable on Amazon.  I also mounted a network cabinet next to the new electric service panel.  Since we have to pull this old wire out of the conduit anyway, once the electric portion is completed, I will work with my electrician to pull the Ethernet and Cable wires through the conduit.   It should be easy enough (famous last words, right?.  All I have to do is connect the new wire to the end of the stuff being pulled through, use a little lube and pull from the other end.   We will see how it goes.   More on that in the next post on how I will build my network in the garage.